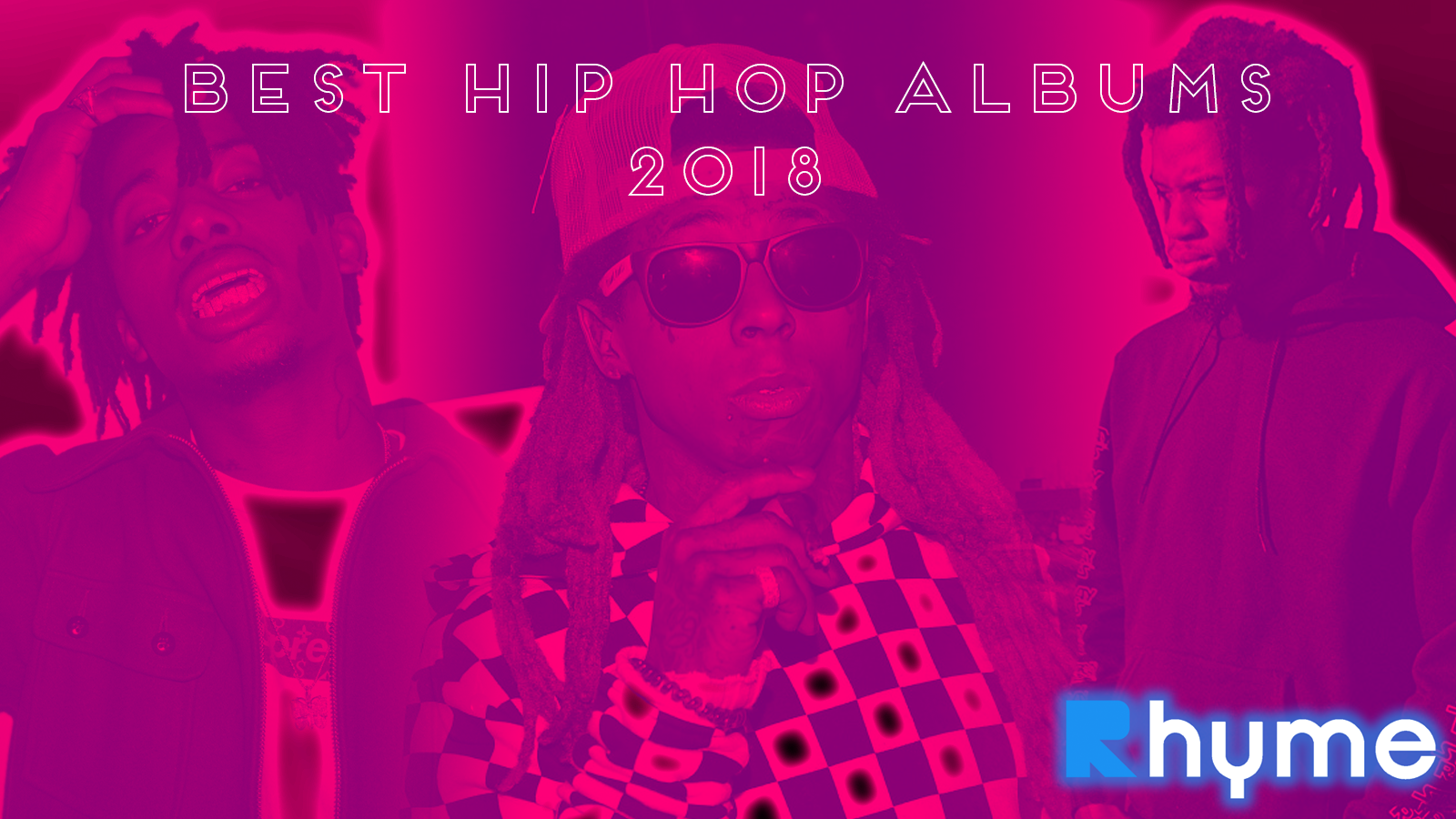 This year has been one hell of journey for the hip hop industry, and the genre is clearly taking over the mainstream youth. Despite the negativity towards the unnerving virtues of some artists, we received plenty of great work from some top names in the industry. It’s been one stellar year for hip hop to say the least. We didn’t include any new wave artists in this list, as we will be coming through with a separate list just to commemorate the great works from the younger gen we received this year. Do you disagree with our list? Agree? Start the discussion on our Twitter at @RhymeHipHop and tell us what you think should’ve been in place. We’ll be releasing a few more lists before the year end.

Black Panther is arguably one of the best feature films from this year, and when word broke that Kendrick Lamar would be curating the soundtrack, the Internet nearly exploded. It all started with the pre-leak of “King’s Dead” which instantly hit mainstream success, then had fans hype to hear the full forthcoming album. The TDE curation is at it’s finest, with most Top Dawg Ent. artists making the cut. Kendrick’s executive production shines in all glory on this one, and his long term career might just land him as one of the best innovators of all time. Kenny tapped a ton of features like SOB x RBE, Travis Scott, Zacari, Vince Staples, Swae Lee, and more. Each single glows a vibe of signature Kendrick Lamar sounds, combined with extreme lyricism fitting to that of the film. We got a bunch of mainstream hits on the album, but that will never undermine the pure talent of curation brought by the king of hip hop.

J. Cole is reigning as a top tier lyricist throughout the entire industry, and his timeless music is shaping the definition of what real artists are striving to be. He can literally go discreet for two years, come back with a project that includes zero features, and still go platinum. His credibility isn’t what makes this project great, it’s the fact he’s shaping real hip hop into a mainstream factor. Luckily for his fans, Cole is still paving way for new sounds and vocals as he evolves his sound. It really feels like he found his sole state in terms of production on KOD, where he takes a deep look into the real struggles that resonates so much with his fanbase. J. Cole delivers his best content yet, but the lyricism resides as some of his best to date. He touches on topics of the changing rap industry, respecting the coming of the new wave but preaching the real impact the younger gen could have on the kids. Cole has reached plethoras of influence, and he portrays the same on his album.

Where do I start on this one? Vince Staples’ comical image has become a message for the ages, and he’s taking a turn for the best in terms of his music. It all started with his debut album Summertime ’06 which reigned at high critical acclaim, and there doesn’t seem to be a piece of work that’s not of quality from the Long Beach native. His third studio album shows a completely evolved style from Vinny, and his experimentation of sounds seems to come to an end. He’s officially found his sound, and the unorthodox approach is changing that of many artists. The sheer impact from Vince’s struggles are the perfect virtues that resonate with many Westsiders. Despite the longevity of what’s known as the Westside style, Vince displays nothing but talent as he uses unconventional means of production. Off-beats and pure lyricals land him a spot on the list, and Staples’ name will live forever in his message. His portrayal of life, death, gang life, and riches are in pure form through his music, but his personality is something held deep to many of his fans. His persona does not erode the potential of quality music, which is on full exhibit for his junior studio album.

A Kanye West x Kid Cudi album was long overdue, but this year marks the end of that drought. Fans worldwide have been wanting this project for years, and surprisingly, they really delivered on Kids See Ghosts. Establishing their duo name as the title of the project, Ye and Cudi display real rap at its finest. We had no idea what to expect on the project prior to its release, but when we finally received the 7-track project, we were nothing but impressed. Each track is a literal highlight of the entirety of the EP, cleaning the plate on the vocal and production end. We can tell Kanye put a lot of work behind the instrumentals, and it’s some of the best executive production we’ve seen from Ye in a long time. Cudi provides signature humms with Kanye’s OG appeal shining in prestige. The overwhelming content provides an vibe similar to that of what we’ve seen in previous years from both collaborators, and we hope to see Kids See Ghosts make a return in 2019.

Earl’s work is quite hard to decipher due to the complexity behind his bars, and the raw instrumentals he brings on each release. We haven’t seen him drop a project in a few years now, but he’s changing the game yet again. Some Rap Songs brings some of the grittiest production and vocals we’ve seen from the man in a while, and despite the negative feedback from some of his Doris fans, he’s officially evolved his sound into one that will reside timeless. Earl finds himself through black expression, and it’s safe to say the project will remain at high critical acclaim for quite some time. He combines jazz influenced hip hop into a true piece of art, claiming a top tier lyricist at heart. He cleans the plate with raw verses that will keep Earl at the forefront of what it means to be a timeless artist.

Playboi Carti is a true trapper at heart, but his rise to fame resides with his un-lyrical mumble rap appeal. Despite the negativity towards the virtues of the same, Carti has completely flipped the switch on his style and sound. With Die Lit, Playboi literally says “RIP” to his mumbling days and cleans the plate on what good trap music should be. If I’m being honest, there’s no skips on this project, as each single brings something new to the table. The Atlanta hip hop scene seems to follow quite a systematic approach to the industry, but Carti’s nonconformist methods of music display his clean appeal to the mainstream. He’s actually bringing good trap music to the table, something most trappers are not doing. His lavish lifestyle will never undermine his music, and Die Lit is hands down one of the best projects to come out of 2018.

ASTROWORLD marks the landing of Travis Scott’s largest appeal, shooting him to the top of the entirety of the rap industry. His production has always remained at par, with existential messages that portrays the mind of Travis. He brings some of his best studio quality material to date, tapping the likes of some of the biggest names to assist in perfecting the engineering. That’s what lies at the highlight of this tape with each single bringing a true offering of Travis’s undeniable talent. The versatility is full fledged on display, and Scott shines on the vocals. Travis glorifies his talent on all aspects of executive producing, flashing his engineering skills to full effect. Despite the names found on the tracklist, Travis lies at the forefront of one of the best albums from 2018.

Quite fitting with Jay Rock’s growing success, 2018 was hands down the best year he’s experienced thus far. The versatility on display speaks ages for the TDE rapper, but Redemption serves as his best project to date. It might be his third studio project, but he planned to acclaim high success with this one. “King’s Dead” came out earlier this year and shot to the mainstream, portraying Rock’s skills and his competence to reach the masses even by making quality music. This can be said for almost all Top Dawg Ent. artists, but the label’s focal point stood with Jay in 2018. He solidifies his overall appeal, but most importantly he solidifies his sound. Breaking barriers in terms of distinction can be tough for some artists, but it’s safe to say nobody’s doing it like Jay Rock.

Arguably the single handedly hottest release of the entire year, the hype surrounding TCV has been spreading for years on end. 2018 saw light for the project’s release, and luckily for Wayne fans, the album lived up to the hype. The 23-track studio album marks his 13th studio album to date, but we’ll leave it to you to decide where it ranks in his discography. Lil Wayne keeps his wits as he cleanly brings some of his best verses in his entire arsenal. Almost every track serves as a highlight, with Wayne claiming king through extremities of production and vocals. The engineering goes deep, and despite Wayne banking the project in his back pocket due to legality issues with Cash Money, he finally received full rights to the album. It’s quite a mixture of classic Tunechi and new wave sounds, but the overall distinction lies within the proficient depth of quality he brings to the table. Multiple aspects of virtues went into the overall effort, but Lil Wayne kept true to his fanbase through a signature fashion.

Denzel Curry might have went into the shadows for some time, but the under-appreciated rapper really shined to his full potential in 2018. It started with the TABOO pre-leak of “Clout Cobain” which landed him one of his first spots on Billboard, but most importantly showed the industry his capability to reach such numbers. His new album released through 3 parts, each of which signified different virtues of Denzel’s mind. We dive deep into the thoughts and integrity of Zel, and he seamlessly portrays the world around us through dark lyricism. He speaks on the desensitization of our youth, the fakes of society, political indecency, and the impure actions of his surroundings. We see him change attitude as we jump from each act on the album, and you can feel the rawness and materialistic methodologies that Denzel attempts to portray. His talent is on full display when it comes to the vocals, but his lyrical expertise facilitates the timeless music Denzel keeps at heart.