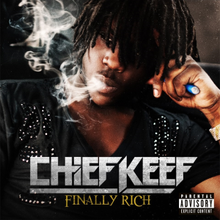 Keith Cozart (born August 15, 1995),[1] better known by his stage name Chief Keef, is an American rapper and record producerfrom Chicago, Illinois. Growing up in Chicago's Englewood neighborhood, Keef began rapping at an early age, and used his mother's karaoke machine and blank tapes to record his music. During his teenage years and while under house arrest, Keef's music videos were met with acclaim from local high school students. His increasing popularity led to him being the subject of a brief bidding war among labels. Ultimately, Keef signed a major record deal with Interscope Records and later signed with 1017 Brick Squad. Keef also became the CEO of his own record label, Glory Boyz Entertainment, which later developed into Glo Gang. His debut albumFinally Rich was released on December 18, 2012.