A New J. Cole Album Is On The Way!

J.Cole has been MIA for a long time now. it’s been about two years since he released a lone project. But today, an iTunes pre-order listing has mysteriously appeared, and it is deffintely ensuring this is a J.Cole album.

Though there has been nothing from Cole himself, the pre-order on iTunes should be a big sign of hope that this is real. The album is set to have 10 tracks. None of which have titles yet. However it is confirmed that this will be a Dreamville release. The album is expected to drop December 9th. 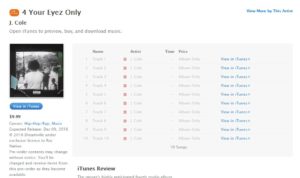 J.Cole’s most recent studio album is 2014 Forest Hills Drive ,which was conveniently dropped in 2014. At the end of 2015, Cole was featured on a compilation Dreamville project titled Revenge Of The Dreamers II. The only material heard from J.Cole in 2016 was a feature on DJ Khaled’s album Major Key titled “Jermaine’s Interlude.” This track sparked a lot of controversy because Cole tossed the idea of retiring out there. So fans should be extremely excited for this new album.

J.Cole updates are hard to come by, but stay tuned because we will bring them to you as they come.

Is J. Cole Training For The NBA?