Kid Cudi tweets at Drake and says to “say it to his face.”

Earlier this afternoon, Kid Cudi replied to Drake on Twitter.  Drake and Kanye originally had beef towards Cudi but Kanye resolved it.  However, Drake did not.  Cudi originally tweeted about fake “rappers” and mainly targeted Drake and Kanye.  You can read out post on that here.

Drake released a song not too long ago titled Two Birds, One Stone.  In this song Drake fires shots at Cudi saying:

Kid Cudi is currently in rehab right now for depression issues.  But that doesn’t stop him from speaking this mind.  Kid Cudi tweeted this at Drake today: 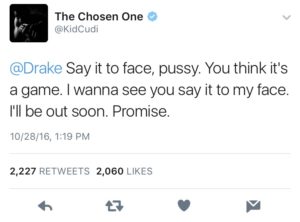 Cudi deleted the tweet but luckily we got screenshots of it.  At around 3:00PM the tweet had over 100,000 likes and retweets.  As you can tell, Cudi has a pretty supportive fan base.  Prepare yourself for possibly another diss track coming soon.
By J. Rivera from California, US (Kid Cudi) [CC BY 2.0 (http://creativecommons.org/licenses/by/2.0)], via Wikimedia Commons