North Bay, CA native Vocab Slick has been making Westside waves, but he’s on his own tide in terms of style. Today he comes through with a well-thought single alongside an accommodating visual.

Slick counts his blessings throughout his life, paying homage to his family, friends, and fans that have stuck with him through it all. He brings an absurd amount of energy to portray his message, something he does flawlessly.

As for the short flick, VS finds himself in a simplified vintage-styled setting where he paints quite a vivid picture throughout. Vocab Slick is due for his official LP in early 2020, so keep your eyes peeled. For now, take a listen to his newest single on your favorite stream platform below. 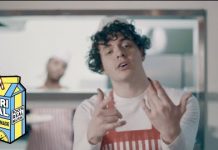