There’s no question that Denzel Curry has had a deep relationship with the late XXXTentacion, and today he spills the beans on some confidential content. X was just cleared of all of his domestic violence charges earlier today, and now we get even more hope on his posthumous journey.

X previously lived with Denzel in his “ULT House” and have been industry favorites ever since. Today Curry takes to his Instagram to share the full Bad Vibes Forever tracklist, X’s announced, but not released project.

The album has been teased ever since the release of ?, which has kept X’s name as a top prospect in the industry. Though the late 20 year old rapper won’t be here to see the release of the project, the younger generation is here to let his music live on. The project looks to run 17 tracks deep, but Denzel’s post only features the first 15 with the 16th and 17th track cutting off in the image. Peep the full tracklist below, and keep your eyes peeled for more specifics on the album. 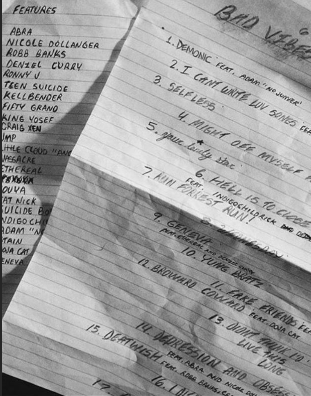