D.R.A.M. has been skyrocketing in 2016 with not only his hit single “Broccoli,” but with features, his announcement of his debut album Big Baby D.R.A.M, and now his announcement to go on tour.

It was just under a week ago that D.R.A.M. announced his upcoming LP should be out soon. Tuesday, he took to social media to announce that the tour will begin January 13th in Nashville. The tour has 13 dates scheduled, and he will be visiting cities such as Atlanta, NYC, Detroit, and San Diego, and LA.

Tickets will be going on sale this Friday so check out the dates below and get yours. The album is expected to drop Oct. 21st, so be ready for that, and stay tuned for any more updates. 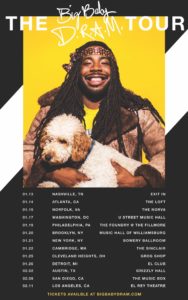