Following the surprise release of Jay Z’s 4:44 album this friday, Jay had some choice of words for the Freeband boss Future. Many seemed to think that on his intro track “Kill Jay Z” Hov dissed Future in his conflict with his ex wife Ciara and losing his child custody. Hov writes, “In the future, other niggas playin’ football with your son/You had lost it, 13 bottles of Ace of Spade what it did to Boston.”

Hov also made another connection to Future and other members of the hip-hop community on his track “The Story O.J.” raps “Y’all on the ‘gram holdin’ money to your ear/ There’s a disconnect, we don’t call that money over here.”

With all that in mind Future took to Instagram this morning posting a selfie with a fat stack up on his ear captioned “U ain’t got the juice like dat. MOOD.” This could just be a coincidence but some people think the timing is just right for a response.

Peep the picture below and stay tuned for more news if Future drops a diss track. 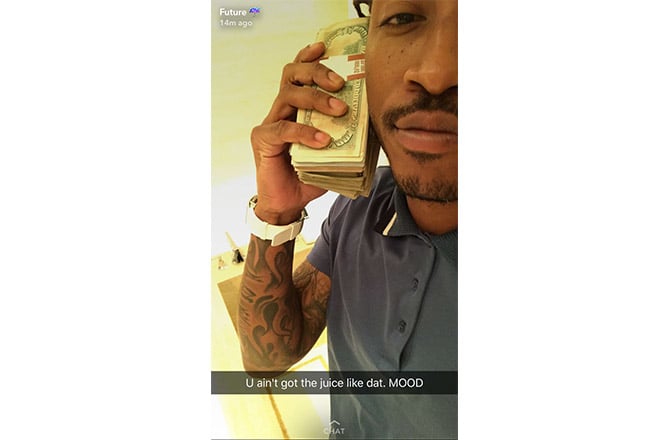 By The Come Up Show [CC BY 2.0 (http://creativecommons.org/licenses/by/2.0)], via Wikimedia Commons