Lil Uzi Vert is showing us that he is undoubtably one of the most persistent rappers in the game. Following his previous two projects, Luv Is Rage, and Lil Uzi Vert vs. The World, Lil Uzi Vert drops a new mixtape The Perfect Luv Tape.

Lil Uzi Vert was voted among the game’s up-and-coming in the XXL’s Freshman Class, and since then he has remained focused on nothing but making music. Uzi has been recognized for his lit, uptempo bangers, and that has made him dominant in 2016. 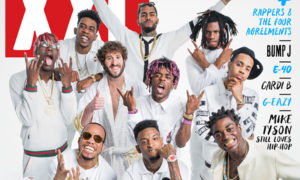 In this mixtape, Uzi supplies 10 tracks, and all follow his regular formula of banging beats, and a hard, distinct delivery. Uzi takes it easy on the features only having Offset, Playboi, and even Future on the guest list. Though there aren’t many features on the tape, there is a powerhouse team of producers, including Maaly Raw, Don Cannon, Zaytoven, Metro Boomin, and Nard & B.

The 22 year old has been on fire as of late, and his previous 2 projects have blown up. Seeing as this is his third project, (his second this year) it is exciting to see what the future holds for this young talent.

Check out the whole tape below and see what you think, and stay tuned for more updates!