Lupe Fiasco announces his retirement, and cancels all three of his upcoming albums after his anti-Semitic scandal.

Sorry Lupe fans. The man himself, who is currently on tour, took to Twitter to blow some steam as he got caught up in a controversy with DJBooth.net. The controversy included his anti-Semitic lyrics towards Jews from yesterday’s track N.E.R.D.

Lupe has also made his Twitter private, so only fans can see his Tweets. Lupe is “taking the hint from God”, and goes to announce that he is done releasing music. Lupe was due for 3 albums between this year and 2017, but have since been cancelled. Peep the Tweet screenshot below: 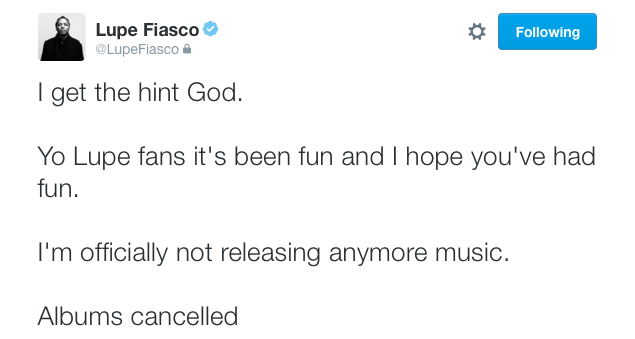 His two upcoming album, Drogas and Drogas Light will not even make it out of Lupe’s arsenal. Stream Lupe’s controversial track N.E.R.D. here, as well as a track off of the original Drogas Light called Made In The USA here. Stay tuned as we get more word on Lupe Fiasco’s retirement.